Free Shipping on all domestic orders above $35

No products in the cart.
0

How to Properly Store Cannabis Flower 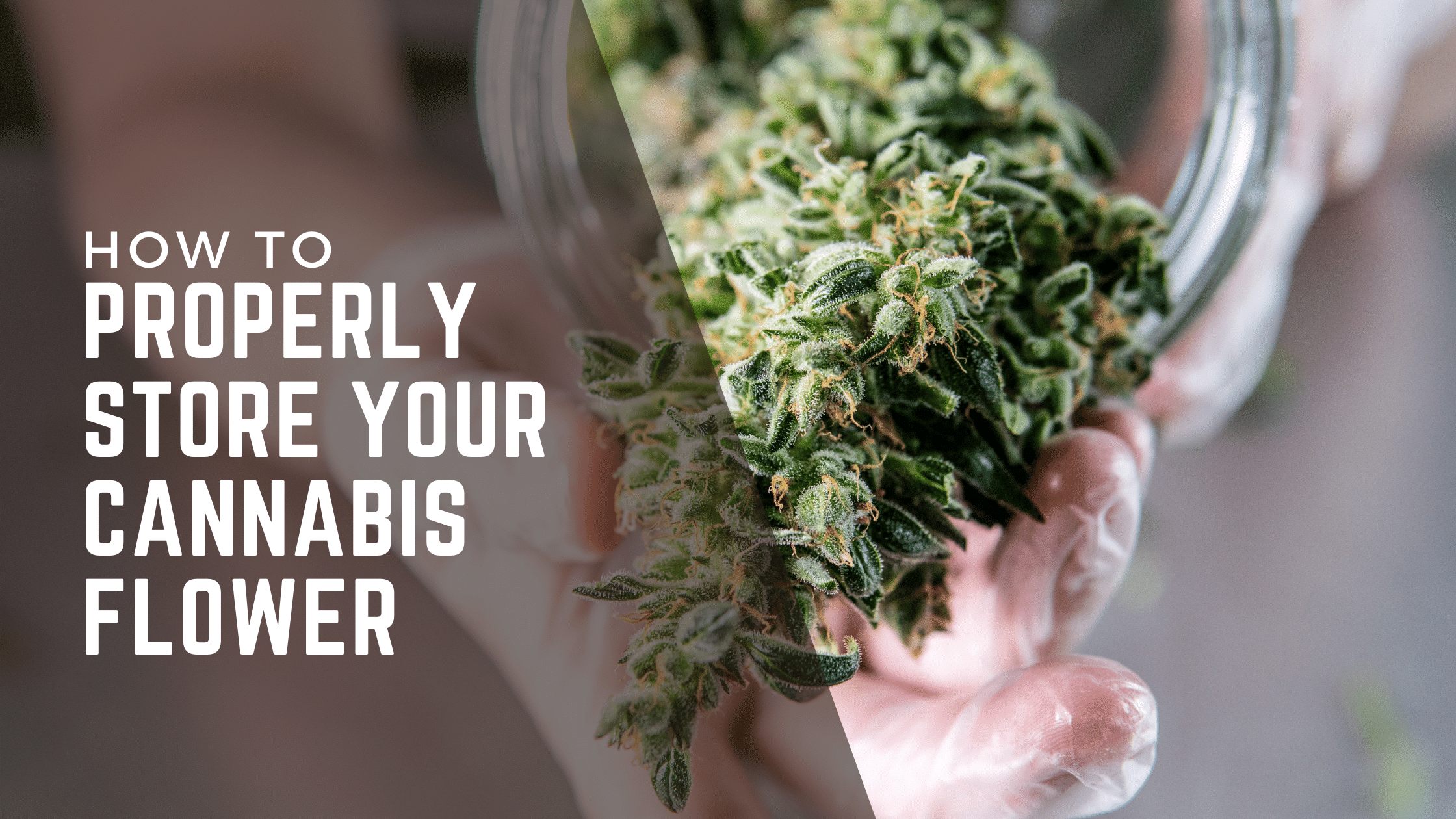 How to Properly Store Cannabis Flower

The cannabis industry is one of the world’s fastest-growing industries, expected to reach $30 billion by 2025. 2020 ushered in recreational legality for Arizona, Montana, New Jersey, and South Dakota, and in 2021, Connecticut, New Mexico, New York, and Virginia joined the recreational landscape. For natives of those states just getting into the industry and those in well-developed cannabis markets, now is the perfect time to learn how to make your stash last.

Think of cannabis as having a similar shelf life to honey. It doesn’t “go bad” in the colloquial sense of the phrase. There isn’t a proper expiration date per batch, but there are inherent issues with setting bud aside for too long.

Dried flower lasts anywhere from six months to a full year, but it’s unlikely that a consumer will get sick even at the one-year threshold. In fact, properly dried and cured bud has been known to last as long as two full years, barring mold and mildew, according to a study published in the Journal of Pharmacy and Pharmacology. It’s important to note, though, that the potency of the dried flower will degrade approximately 16 percent of its THC by the 12-month mark. The quintessential high so commonly coupled with recreational marijuana will be significantly reduced or relatively non-existent by one year of storage. As with any kind of organic material, it becomes brittle and dry over time, especially when kept in conditions not conducive to the fragile plant’s fierce cannabinoid consistency.

How to Properly Store Your Bud

So how does a casual enjoyer of cannabis get the most out of their purchase? It begins with the proper storage container.

The plastic bag that has become somewhat synonymous with dried bud is actually far from the best option. The configuration of plastic has been proven to affect the trichomes in the marijuana flower negatively. Plastic creates a static charge that attracts trichomes away from the bud itself; trichomes are the tiny hairs on marijuana that produce potent cannabinoids and terpenes. Destroying that crucial part of the cannabis plant with improper storage is detrimental, nearly immediately, to the bud’s potency. Lackadaisical storage processes are doing far more harm than good for casual consumers, and the experience can be reduced in potency by nearly 20 percent when proper storage procedures aren’t implemented.

Metal carriers are strongly advised against, as metal can change the taste of cannabis over time; if metal is all you have, make sure it’s titanium, though. This specific metal isn’t known to alter the cannabis’ flavor.

To tamp down on humid conditions and steer away from plastic, the best option is to opt for an opaque, lidded mason jar. It blocks out humidity and oxygen exposure while keeping the product clean and full-potency for as long as possible. Some frequent cannabis users swear by placing their filled jars in the fridge or freezer as a way to preserve the notable cannabis scent, but there is a definite negative to such a chilled location. 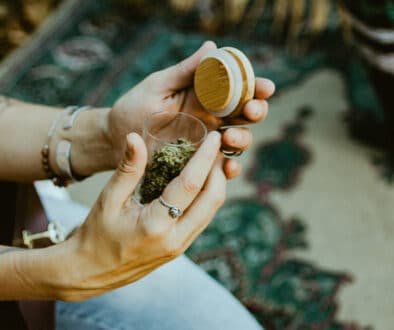 Lidded jars are perfect for cannabis storage because they alleviate the plant’s quick oxidation process. When oxygen is present, the cannabinoids break down quicker, causing the aforementioned potency lack, but it goes beyond just an inability to get a consumer “high.” When too little air circulates, humidity rises, moistening the buds and free rein to mold spores. Conversely, when the bud is exposed to excessive air circulation, it dries out, and the terpenes, cannabinoids, and phytonutrients begin to degrade, even completely altering their chemical balance when exposed to oxygen.

Where To Keep Your Cannabis Flower

As amazing as a plastic bag is at keeping food scents and moisture from infiltrating a standard refrigerator, a commonplace Ziploc does more harm than good to a batch of dried cannabis. The bags encourage the accumulation of moisture, and with no escape, the humidity inside the bag rises. It’s best to store cannabis in a humid atmosphere between 55 and 63 percent. This is a rather finite range, as any more humidity escalates mold growth, and any lower percentage dries out the product, causing the leaves to break and disintegrate.

The trichomes will actually fall off the plant when it’s chilled and frozen, dramatically decreasing potency. The fragile trichomes will become brittle and easily tear away from the plant, leaving consumers with a reduced high. The moisture in a fridge or freezer can easily contribute to mold growth on organic material as cannabis. So what is the perfect temperature at which to preserve cannabis? 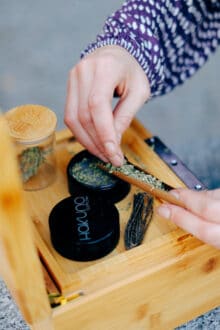 Cannabis is best stored in an air-tight container, like an aforementioned mason jar or ceramic vessel, and left in a dark, cool space. One of the most notable cannabinoids, THC, quickly degrades in direct sunlight through a process called decarboxylation, into non-intoxicating CBN. UV radiation is a death sentence to organic material, especially for prolonged time periods. Using a box that deprives light of penetrating and impacting the cannabis’ THC levels is a must.

The Perfect Temperature and Humidity Levels

Any temperature between 60 and 77 degrees Fahrenheit is perfect. Think of the temperature in a closet or cabinet. Warm but not suffocating and humid. Cool and potentially breezy, but not chilled. As long as the jar or canister is properly sealed, air conditioning shouldn’t make a difference. Oxidation of cannabis happens quickly when the dried flower is exposed to air. It’s an easy fix when the jar is lidded and kept in a dry place, but it bears repeating.

How To Know When Your Cannabis Is Expired

So you’ve done all of these steps and secured yourself the perfect cannabis storage system. What should consumers look for when the stash is reaching its potential expiration date? The answer’s simple: smell it. Enjoyers of cannabis are all over the spectrum when trying to define what qualifies as “gone bad”; one thing they can all agree on, though, is that if the cannabis has lost its signature smell, it’s reached a solid benchmark that the bud has decreased its potency considerably and it’s time to consume. 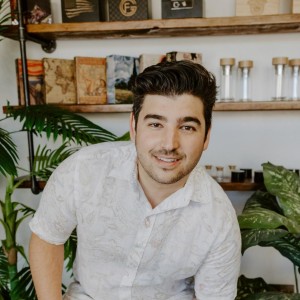 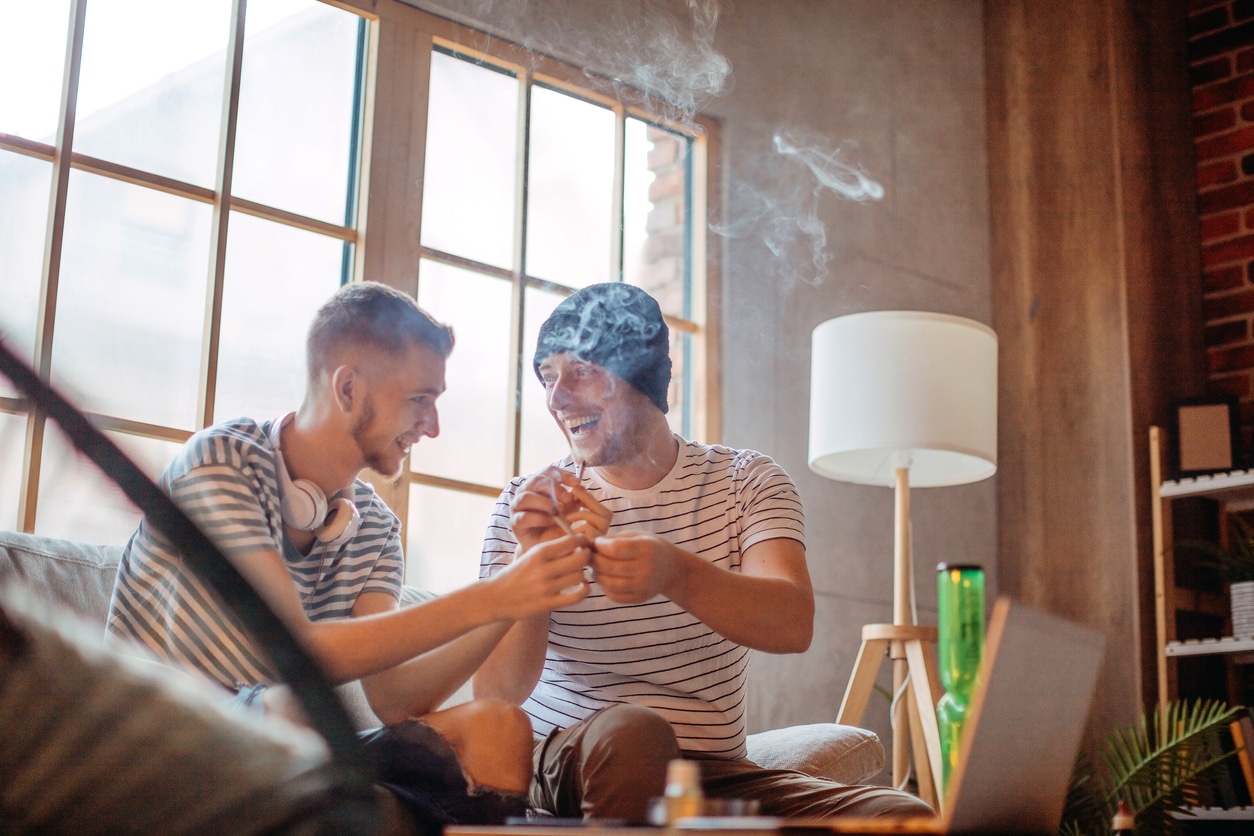 10 Awesome Things to Do When Stoned

Best Cannabis Podcasts to Listen to While Stoned 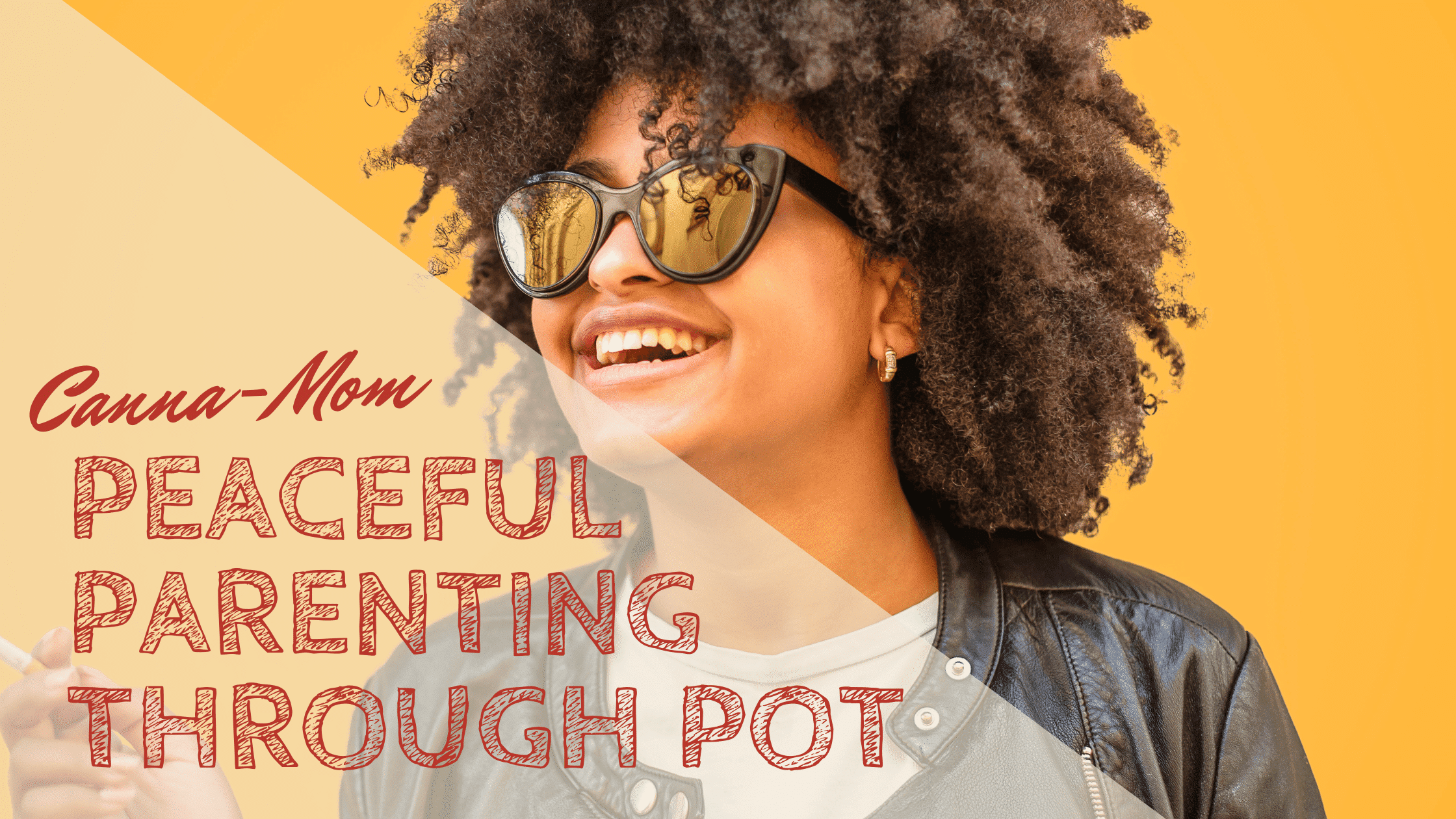 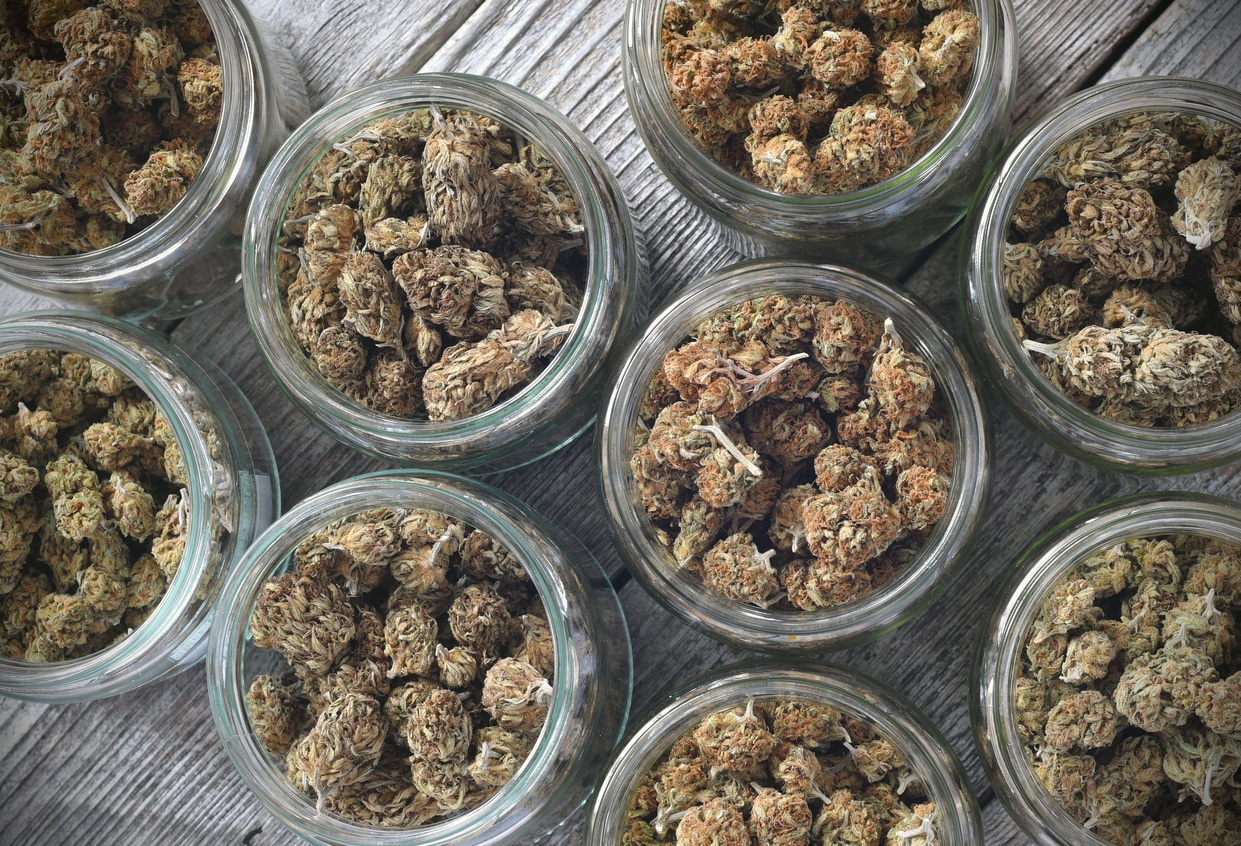 How to Legally Store Cannabis in Recreational States 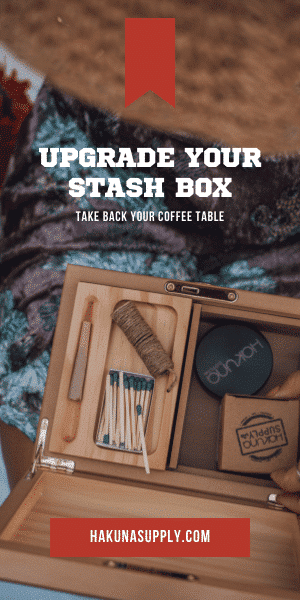 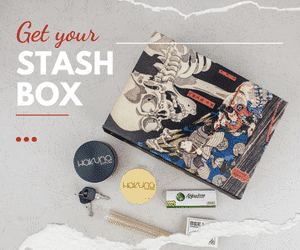 Get The Latest Updates

No spam, notifications only about new products, updates.

10 Awesome Things to Do When Stoned

Getting stoned is a uniquely pleasant experience, whether it’s your first high or your five-hundredth. You can feel your body relax and your mind open

Best Cannabis Podcasts to Listen to While Stoned

The Best Cannabis Podcasts To Listen To While Stoned  Drop in and tune out to these highly educating podcasts to enjoy while stoned.  In the

Peaceful Parenting Through Pot An exploration into the rise of Gentle-er Parenting and the Canna-Mom movement. A recent survey of a popular Stoned Parenting group

How to Legally Store Cannabis in Recreational States

While different states have enacted laws regarding the use of cannabis. Here are some important regulations you must know about cannabis storage.

Stay up to date with product launches, events and more. We won’t share your information with any third parties and you can unsubscribe at any time.
Join
Facebook-f Icon-social-instagram Twitter

WARNING! If you choose to smoke CBD flowers, please be advised that you do so at your own risk; any form of smoke inhalation may be harmful to your health. All descriptions of the traditional uses of these CBD flowers have been taken from information available to the public on the internet and may not be substantiated by scientific evidence. Please refer to the product test page on our site. The statements on HakunaSupplyCBD.com have not been evaluated by the FDA and are not intended to diagnose, treat, or cure any disease. Always check with your physician before starting a new dietary supplement program. Contact us if you have further questions.

Where should we send your coupon?

Start your morning with a rich and smooth cup of CBD-infused coffee. The perfect combination for when you need that early pick me up but want to stay relaxed and focus. 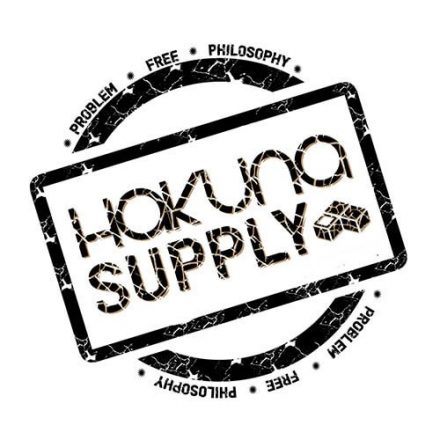 You must be 21 or over to view this site.